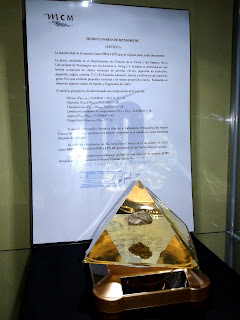 The identification of lunar materials and their correct conservation is a guarantee of scientific research. Numerous lunar samples have arrived at the laboratory for identification and analysis, contributing to the knowledge of lunar sciences.

Thanks to these lunar samples and many others, it has been possible to carry out numerous investigations that have led to thousands of photomicrographs, dozens of analysis reports and a wide arsenal of research, archive and repository data. 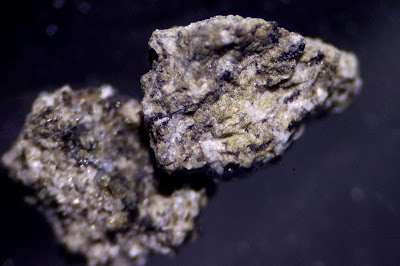 History: Two pieces were purchased from nomads in Erfoud, Morocco, in October 2006 and February 2007.

Physical characteristics: A. Habibi purchased two pieces with a total mass of 477 g in Rissani, Morocco; several other pieces of the same stone totaling 895 g are with Ait Elkaid in Rissani, Morocco. Dull black/brown fusion crust is nearly complete and inside slightly tarnished where absent. It is a gray, coarse-grained, pristine magmatic rock consisting of millimeter-sized phenocrysts of mainly pyroxene and plagioclase.

Geochemistry: Mineralogy by EMP and SEM. (Trace and major element analyses ICP-MS and ICP-AES, J.-A. Barrat, UBO). Pyroxene grains are complexly zoned (En65Fs21Wo13 to En2Fs83Wo15; FeO/MnO = 78 [average]). A few compositions correspond to pyroxferroite. Plagioclase is normally zoned from An75-91 (average An89) with minor olivine (Fa80-95). Chondrite normalized REE pattern with an enrichment of 53 (La) to 40 (Yb). Trace element pattern with negative anomalies of Sr and Eu. Interstitial glass is high in silica (75 wt%) and contains microcrysts of K-feldspar with a significant celsian component. The chemistry and major and trace elements are identical to NWA 032-479-773 and LAP 02205-02224-02226-02436- 03632. The texture is very similar to that of the LAP specimens. The very low abundance of olivine and the relative abundance of silica in NWA 4734 are the main differences beside the grain size and the slightly different composition of the major phases.

Type specimens: A total of 20 g of sample and one polished section is on deposit at UPVI. Mbarek Ait Elkaid holds the main masses.

Submitted by: A. Jambon, UPVI. The description of NWA 4734 was submitted as a monzogabbro, but the Nomenclature Committee was not convinced by the materials submitted that this was a correct sub-classification for this sample. 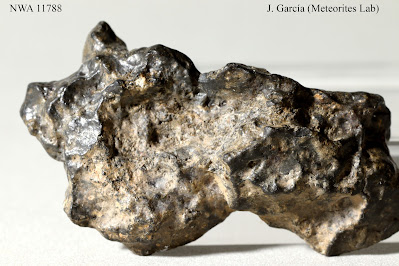 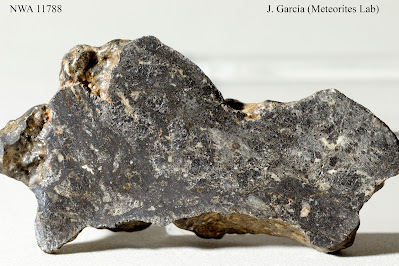 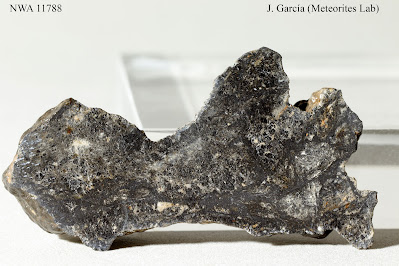 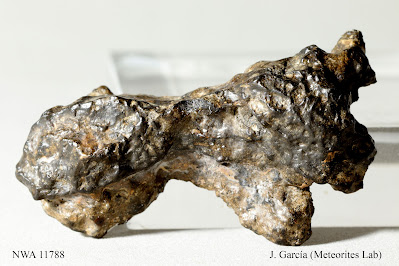 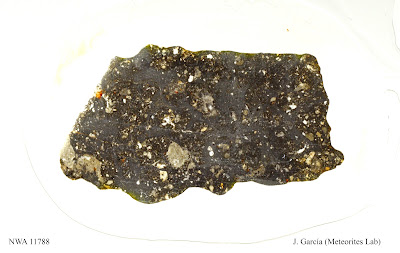 Petrography: (C. Agee, UNM) This meteorite is a breccia of fragmental pyroxene, olivine, plagioclase grains. There are domains that are fine-grained and cataclastic with shock melt and vesicles.

Specimens: 28.9 g including a probe mount on deposit at UNM, Dustin Dickens holds the main mass. 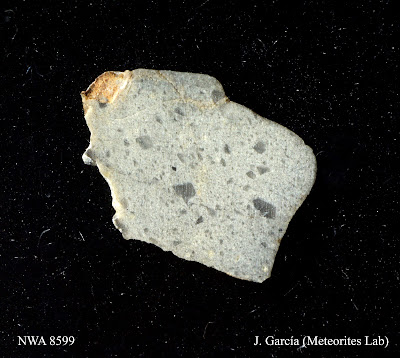 History: Purchased by F. Kuntz in June 2014 from a dealer in Zagora, Morocco.

Classification: Lunar (troctolitic granulitic breccia). On the basis of essentially identical texture, mineralogy and bulk composition, this specimen is paired with NWA 5744.

Specimens: 7.47 g including one polished slice at PSF; main mass with Kuntz. 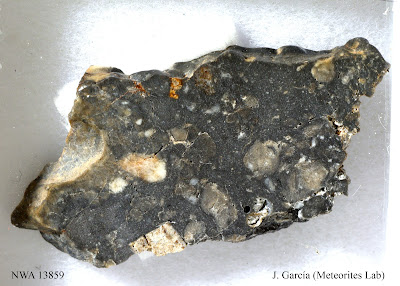 History: The meteorite was purchased by Said Yousfi from a dealer in Temara, Morocco. The largest second largest 356 g fragment was subsequently acquired by Luca Cableri. One sample was analyzed by Ansgar Greshake at MNB and a second sample by Paul Carpenter at WUSL. 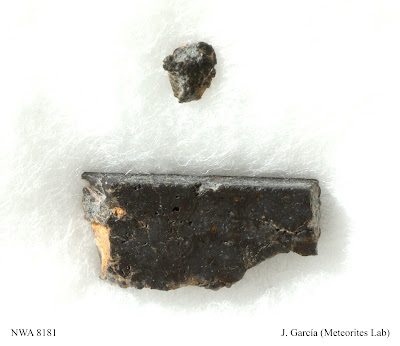 History: Purchased by Fabien Kuntz in June 2013 from a Moroccan dealer at the Ensisheim Show.

Classification: Lunar (feldspathic vitric fragmental breccia). The distinctive texture and bulk composition of this specimen indicates that it is paired with NWA 4936, NWA 5406 and other stones from the Siksou Mountain area in southern Morocco.

Specimens: A 3.7 g specimen with one polished surface is at UWB. The main mass is held by Kuntz. 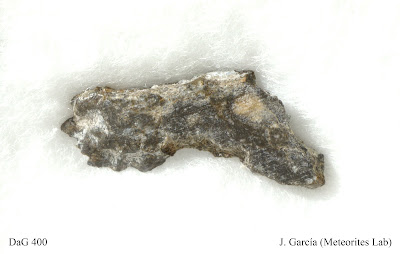 A 1.425 kg stone was found in Dar al Gani in the Libyan Sahara.  Classification and description (J. Zipfel, MPI): the meteorite is partly covered with a brownish fusion crust; fresh surfaces are gray to dark gray; matrix is well consolidated; clasts include subophitic and fine-grained to microporphyritic impact-melt breccias, granulitic fragments, intergranularly recrystallized anorthosites, and mineral fragments; chemical and O isotope composition is characteristic of lunar highland meteorites (Zipfel et al., 1998b); abundances and composition of noble gases do not suggest a pairing with DaG 262 (Scherer et al., 1998b).  For further details, see Zipfel et al. (1998b).  Type specimen and two polished sections are with the MPI; main mass with finder. 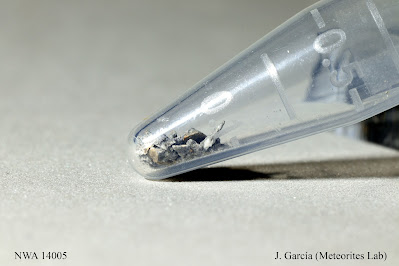 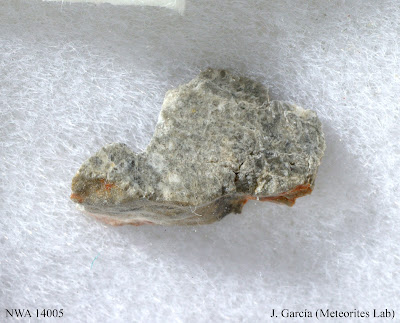 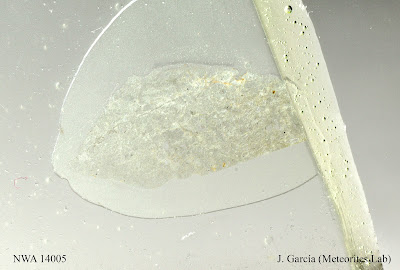 History: Acquired in 2020 by Jose Garcia from Khaled Zed, who had previously found the sample in Algeria.

Physical characteristics: Single stone, gray in color,covered by desert varnish. It retains a small part of the eroded fusion crust. The interior is composed of light and dark clasts, with visible shock melt veins present throughout the matrix. 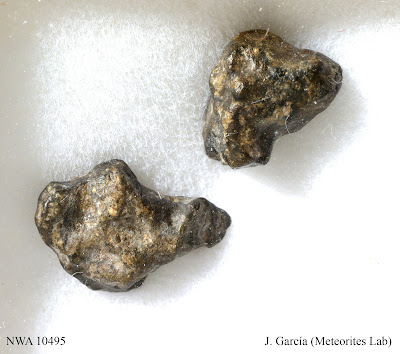 History: A group of similar stones were found together at an undisclosed location in southern Morocco during 2015.

Specimens: 24.3 g including one stone polished on one side at UWB; the remaining material is held by the anonymous finders. 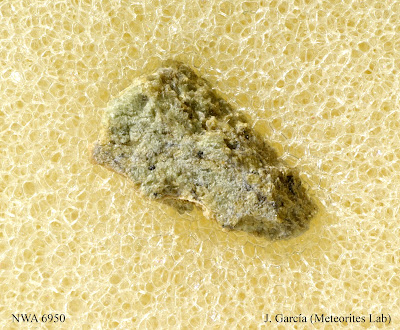 History: Reported to be found near the border between Mali and Algeria in June 2011, and purchased from the finder by Adam Aaronson in August 2011.

Classification: Achondrite (lunar, gabbro). This specimen is texturally and mineralogically identical to NWA 2977 and the olivine gabbro clasts in NWA 773, NWA 2700, NWA 2727 and NWA 3333, and evidently is paired with those stones.

Specimens: A total of 20.1 g of sample and one polished thin section are on deposit at UWS. The main mass is held by Aaronson. 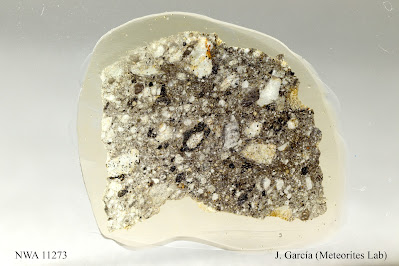 History: Material excavated from a site near Tindouf, Algeria was purchased by a consortium of collectors (Rob Wesel, Eric Twelker and Jason Phillips) in April 2017 from Moroccan dealers. 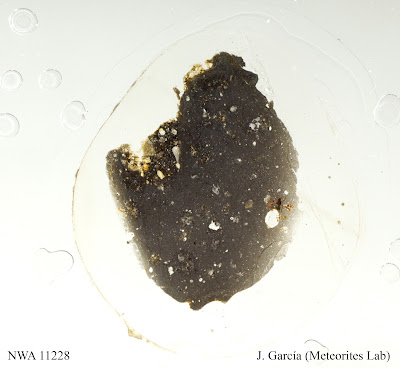 Specimens: 20.3 g including a probe mount on deposit at UNM, Dustin Dickens holds the main mass.

Popular posts from this blog

Welcome to METEORITES LAB,  for petrographic studies, and also preparation and conservation of astromaterials and geological samples (rocks, fossils, lavas, etc) for scientists and collectors, and classification of new meteorites in The Meteoritical Bulletin. Quite often I receive notifications from people who believe they have found a meteorite, and turn to me for study. For this reason, there is a Research protocol to which I can receive your samples for study and classification of astromaterials. Then I leave the information regarding this research protocol and how to proceed to submit your samples for analyses. Curation services are also offered for the preservation, documentation and preparation of samples. Uncovered thin section preparation service for the classification of meteorites and rock petrography sections for educational purposes.  AVOID LEGAL TROUBLES.   The identification of meteorites by petrographic techniques does not compromise that advanced techniques can vary
Post a Comment
Read more 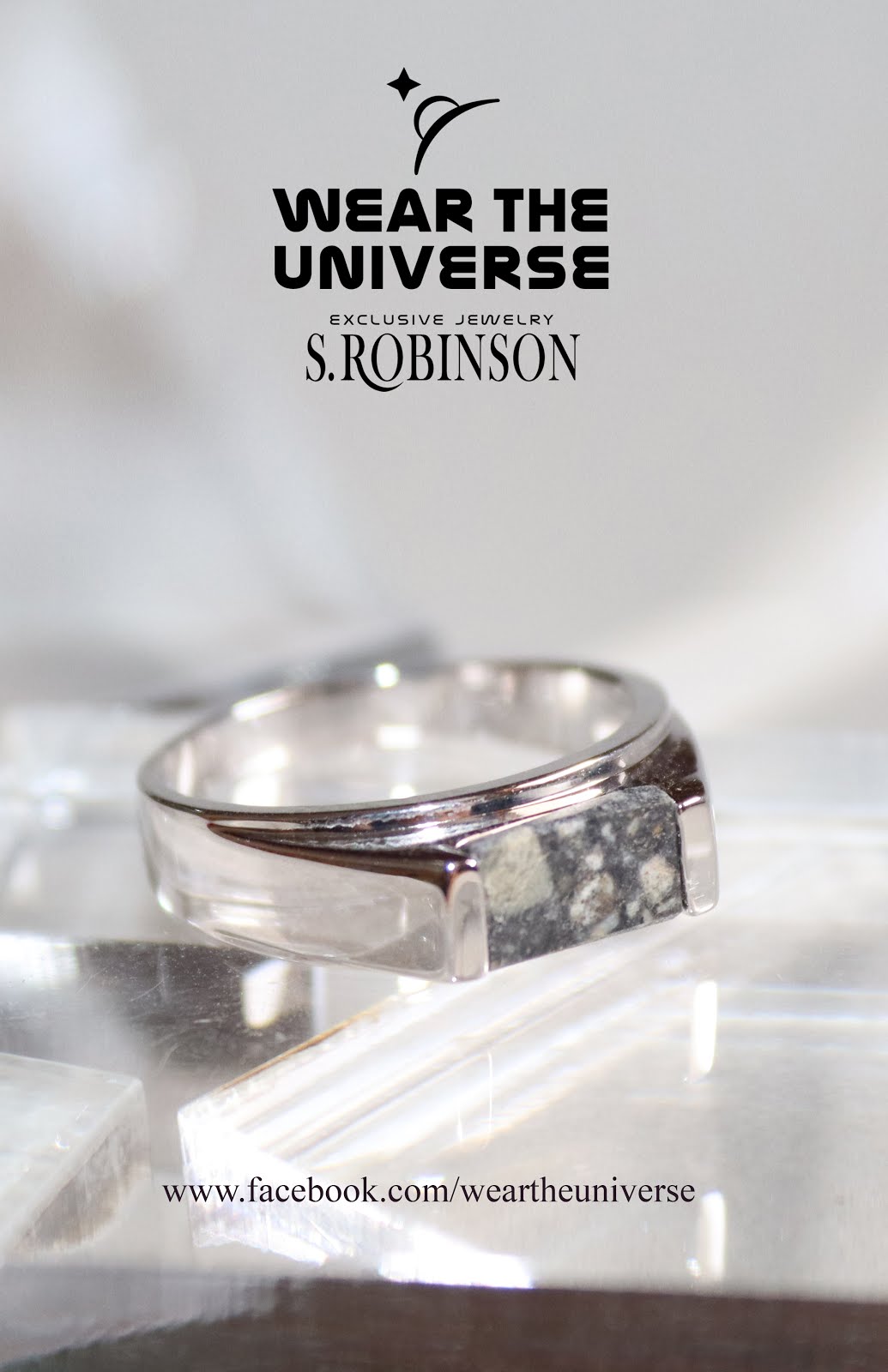 Exclusive Jewelry, made with meteorites. 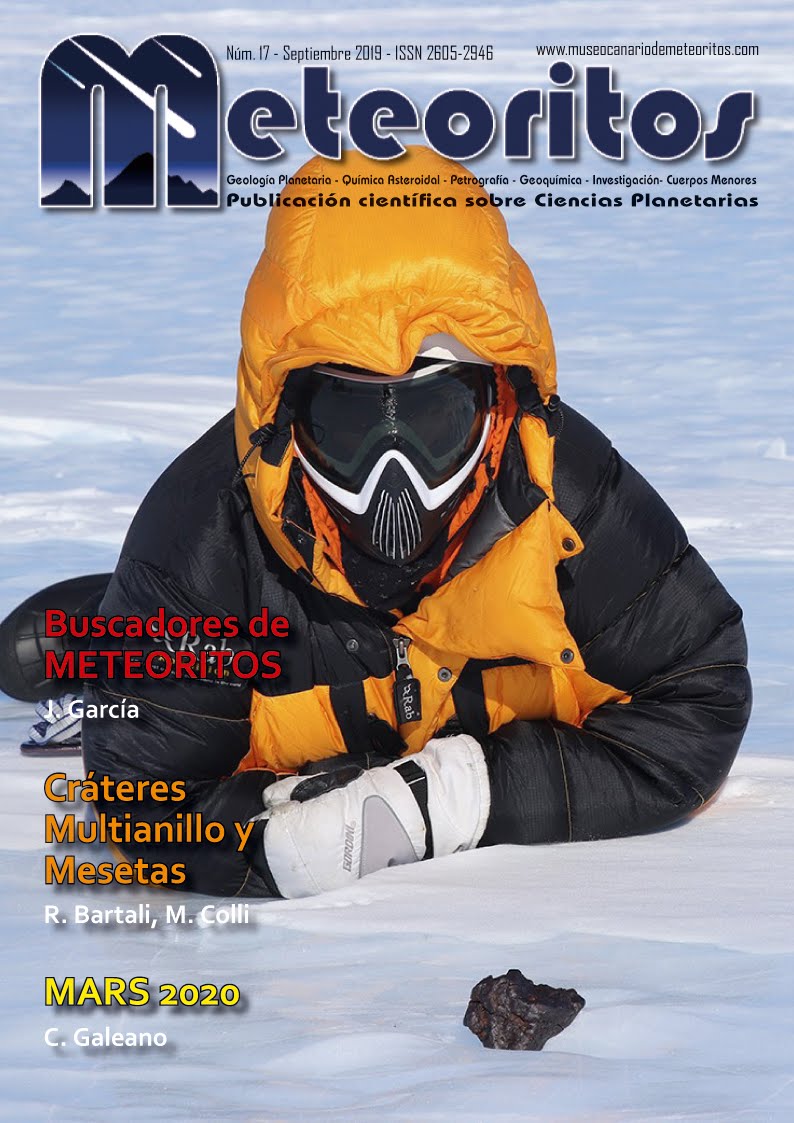 Join it for free. The best spanish publication about Meteorites.